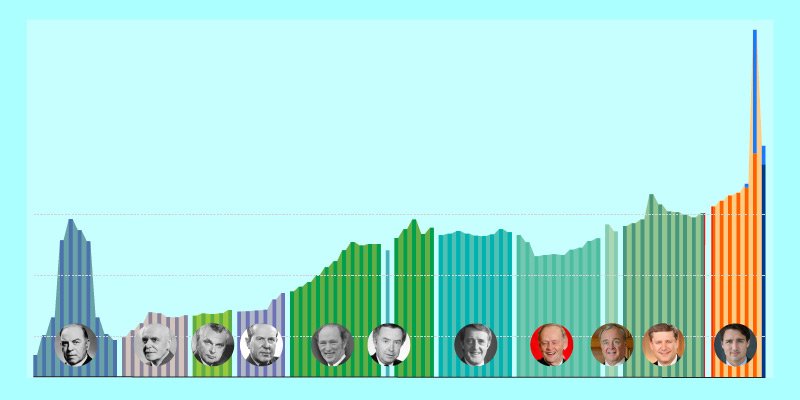 After experimenting with hundreds of billions in new spending initiatives and an array of temporary programs in response to the pandemic, the federal government appears primed to further expand its involvement in the post-COVID economy to “build back better.” However, the size of government in Canada had been increasing well before the pandemic, and based on that experiences, this approach is unlikely to produce its desired results.

There are two primary measures to gauge the size of government. The first is per-person spending. In 2020/21, the federal government spent the largest amount of money per person (adjusted for inflation) in Canadian history by a wide margin. Indeed, per-person program spending will reach a projected $17,091 (in real 2021 dollars), which is approximately double the amount spent during the 2009 recession and at the peak of the Second World War.

But the rapid increase in spending began well before the pandemic. During Prime Minister Stephen Harper’s last year in office, program spending was budgeted to reach $263.2 billion. This meant per-person spending (again, after adjusting for inflation) would be $8,063 in 2015. However, Prime Minister Trudeau immediately increased spending after winning election in late-2015 and has continued this trend every year since.

By 2018, federal per-person spending had grown to $9,061, which was the highest amount in Canadian history up to that point. Per-person spending set a new record again the following year, rising to $9,500. This means the Trudeau government increased real per-person federal government spending by nearly 18 per cent during its first term in office, and before any recession.

Read the rest at Fraser Institute……